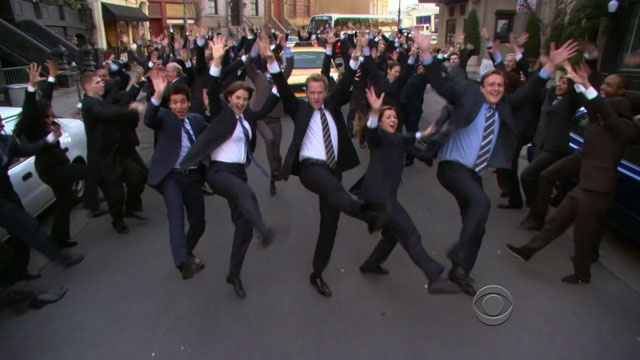 …-dary! How I Met Your Mother celebrated its 100th episode with a comedic driven, Mother teasing, suit wearing, dance spectacular!

Lets start with this episode’s secondary plot. Barney struggles with hooking up with a bartender while Marshall, Lily and Robin fight over if the bartender is actually hot or not. Robin says its only circumstantial hotness because she is behind a bar. This results in Robin sneaking behind the bar and for a small moment, during which she becomes extremely irresistible. Meanwhile, Barney, played by NPH, normally has no troubles suiting up and getting with the ladies. But this time his two favorite things, girls and suits, conflict with each other because the bartender hates men who wear suits. Barney’s story concluded in a climatic dance number joined by the rest of the cast, about Girls Versus Suits, titled “Nothing Suits Me Like a Suit“.

Now for the main plot of Ted Mosby’s continuing struggles to tell the simple story to his kids of “How I Met Your Mother“. Finally, in the 100th episode, everyone gets to meet the person we have been anticipating since the first episode. That’s right, we all finally met the Mother’s roommate. The missed opportunity of this episode being called “How I Met Your Mother’s Roommate” actually resulted with a great comedic and engaging story. At the start of the episode Ted Mosby meets Cindy, played by cute Rachel Bilson. Due to the unreliable narrator and clever writing of the show we are led to believe that Ted has finally met the Mother. A quarter through the episode they flip it on us and reveal that she is not the Mother but instead the true Mother’s current roommate. The twist was introduced when present Ted, in 2010, picks up a little yellow bus and future Ted tells his children that that was the first time he saw the bus that is currently on the shelf behind them in 2030. Major props, pun intended, to the writers to think to include a prop in the story that has been in the future 2030 scene of Ted talking to his children since season 1. After Ted picks up the bus, Cindy quickly explains that it is not her little yellow bus, but in fact her roommate’s. Sadly that is when we learn that Cindy is not the Mother but lucky for us she is fully willing to explain what kind of person the true Mother is.

Cindy has a roommate complex because she always fears that her roommate will steal her boyfriend, (which she, obviously, eventually does). Ted promises that he will never fall in love with her roommate, (which he will). On the date Cindy can’t stop talking about her roommate. Cindy tries to explain the weird things her roommate does but Ted loves all of them. The Mother making paintings of robots playing sports and also likes making breakfast food sing show tunes. Future Ted says that in 2030 the robot volleyball watercolor is currently in the den and the Mother’s rendition of “Memory” by an English muffin is the most hauntingly beautiful thing he as ever heard. 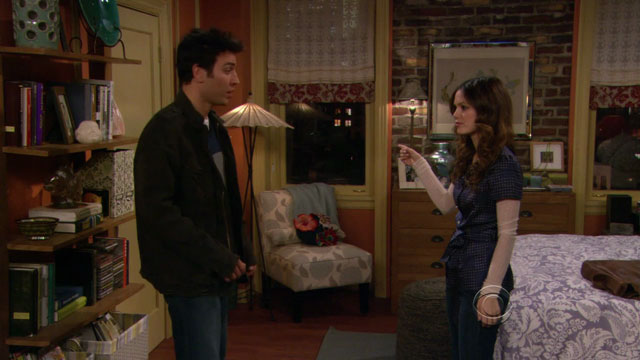 Since Ted is a teacher at the same university Cindy is attending as a student, she stops her relationship with Ted, even though he does not have her as a student and they are not even in the same department. She has a scholarship and does not want to lose it if something happens. The true Mother also goes to the same university but she might not be so concerned about the strict university rules or have a scholarship to worry about. Plus, Ted wants to ignore the rules with Cindy, so of course he will want to ignore them when he finally meets the love of his life. As far as we know, Ted and the Mother might not even meet for another few years so they could both have finished working or attending the university.

In 2010, however, Ted does not want to give up on Cindy so he goes to her apartment in the rain with the yellow umbrella. When he gets there Cindy says her roommate is in the shower so they talk in Cindy’s room. As Ted tries to get back together with Cindy, he tries to find things in her room they have in common or that he finds interesting. He ends up picking the only three things in the room that are her roommates, showing that his true love and future wife is only a few feet away. Ted picked up the roommate’s album that Cindy is borrowing, “Who Will Cut Our Hair When We’re Gone” by The Unicorns, and Ted has never met anyone who owns the album. The roommate liked World’s End by TC Boyle enough to give a copy to her roommate, which Ted also liked. The roommate also plays bass in a band and Ted says his ideal woman plays bass. Ted leaves Cindy’s room defeated, as they decide that he is clearly not into Cindy. He ends up not meeting the woman of his dreams that night, but happens to see a glimpse of her foot as enters her bedroom from the bathroom. Ted leaves the apartment and forgets the yellow umbrella, inadvertently leaving it with the original owner.

It was a great episode overall but I am a little disappointed that Rachel Bilson does not play the Mother. She would have been great in the role but I am assuming she does not want to commit to a TV series. I hope Rachel Bilson does show up in more episodes as the Mother’s roommate because she would be an interesting side story until Ted finally meets the true Mother.