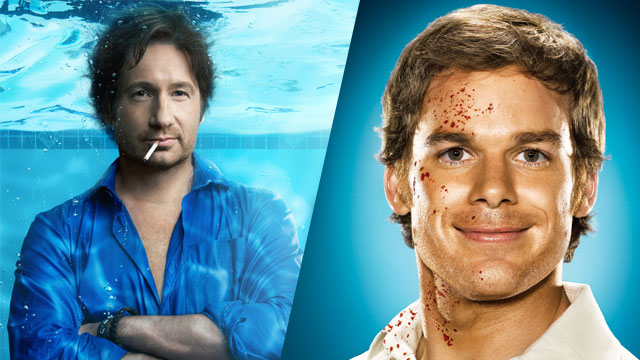 Showtime’s two starring bad boys had their season finales last night. No matter how many bad things these guys do, everyone can not help but love them, and their shocking season finales only leave you wanting more mischief.

Californication is not one of my favorite shows of all time like Dexter is. I am only teaming these two shows into one post instead of two due to the fact I don’t want to spoil either finales, so lack of content to talk about. I had only started watching Californication right before the start of this season. It has grown on me, each season better than the last. The third season had some really great comedic episodes with a nice amount of drama sprinkled throughout the season to make it the best season so far. The season three finale had a more dramatic tone with a story that spanned all three seasons and concluding with a shocking final scene. David Duchovny plays the main character, sex addicted Hank Moody, who always gets himself into situations but always smoothly manages to get out out them. The finale deals with a long running situation Hank started in the first episode of the series and had to deal with for the past three seasons. Everything finally spirals out of his control and for the first time, Hank may not get out of it. I have no clue what to expect from season four, but the series has taken itself into an interesting direction.

The season four finale of Dexter was fast paced, shocking and emotional. Of course they wrapped up the main plot of season four but they also had a good subplot that was building up from four seasons worth of content, calling back to many elements, especially season one. Like always, Dexter’s finale narrative was amazing with many twists and turns and another shocking final scene. This scene was completely unpredictable and extremely emotional. I will admit that I cried my eyes out.

One Reply to “Californication and Dexter season finales”