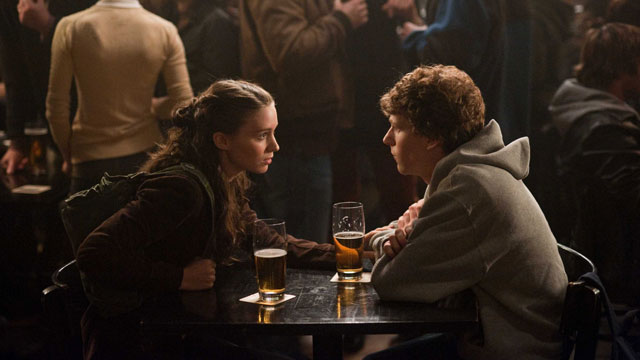 The Social Network is a little indie film that not many people have heard of. It is biographical drama of the creation of a small website which has very few people, who only write and post images of their boring uninteresting lives, known as The FaceBook.

The film stars Jesse Eisenberg as Mark Zuckerberg, also known as CEO Bitch. They look so much alike but actually act much different. The real life Zuckerberg is more awkward and avoids the spot light. Eisenberg portrays Zuckerberg in a more interesting way, which I feel fits better for the film. More like a smart, fast talking, out going and power hungry mastermind super villain. Zuckerberg’s best friend Eduardo Saverin is played by Andrew Garfield, also known as Spider-Man. The meat head villains of the film, Cameron Winklevoss and Tyler Winklevoss, are both played by the multiple take friendly Armie Hammer. And by their side is the real life Divya Narendra played by Max Minghella, who are both ironically known as “Never heard of this guy before”. And finally, Justin Timberlake plays Sean Parker, the once co-founder of Napster. I find the casting choice for this interesting (Besides the fact that its Justin Timberlake) because Timberlake must have lost money due to file sharing of his music on Park’s Napster.

Its obvious that the film shows Mark Zuckerberg as an asshole and the bad guy. But I feel as if most people don’t see how everyone acted like an asshole and were the bad guys. The Winklevoss twins did not create FaceBook and dragged their feet about the entire situation until much later. Sean Parker was a crazy person who did get in trouble with a drug bust. And as for Eduardo, he did not want to take all of his focus to FaceBook and he was the one who failed to read his own contract. The book that this movie was based, The Accidental Billionaires, was consulted by the real life Eduardo Saverin. So I was surprised that since it was from his perspective, it did not overtly show him as the victim. But every single one of the character’s acted like assholes and it is their own fault for failing to stand by Mark Zuckerbergs side and become rich themselves.

David Fincher directed The Social Network and again partnered up with Jeff Cronenweth to do the cinematography. The film was shot with a REDONE camera which made the film have a distinct visual style. Very low natural light and muted realistic colors. This completely digital 4K camera creates simple clean images that match the conceptual idea of technology world. One amazing scene where The Winklevii lose the rowing race was even shot with a tilt shift effect, to give it even more of a more dramatic original style. Trent Reznor did the score for The Social Network and it was top notch. It also had a interesting feel to it that match the realistic version of the technology world and no the unrealistic version featuring flat boring techno.

Many people have pointed out that not everything presented in The Socal Network is true. From what I have read, the majority of events are true, and everything that is “fake” are more like half-truths. One important event, Mark Zuckerberg fighting with his girlfriend at the beginning of the film and it becoming the catalyst for FaceBook itself. Some has said she is not real, while other say that those LiveJournal entries are real and so the girl could be possibly be a real person. I believe that all those half-truths that have been hollywoodized or changed to fit the film better actually work. It is not a documentary, it is a dramatic film that is just based on a true story. All other films that are based on a true story do not accurately portray the very important dialog between the characters. If they can change the dialog, they should be able to change people and events if it works.

Then there is the debate that FaceBook is just a fad and that it weakens The Social Network. As history has shown us, no tech company or one single website can stay in the spot light for long. The rivalry of Apple and Microsoft has been going strong since the 80s. Yahoo was popular in the mid 90s and was surpassed by Google in the 2000s. And then there was the once social media giant MySpace and even for then there was Friendster. Does anyone remember AOL and Instant Messenger? As we have learned in this fast pace technology driven world, everyone has Attention Deficit Disorder and always want the latest, coolers, and most popular new thing. So one day in the future FaceBook might be forgotten along with so many others, but currently this growing expectantly website giant has every ones focus. It is unimportant if FaceBook is a fad or not because The Social Network captures the very intriguing rise of the giant company. So in the future, I will be very excited to see the film that is about the fall of FaceBook.

The film shows the seemingly boring technology world, as an emotionally drive world with deep characters, all willing to back stab each other at any moment. It feels as if it was the sequel to Pirates of Silicone Vally. My pick for the Best Picture of 2010 is defiantly The Social Network. It captures this current moment time of the Internet world perfectly. As having watch the film a number of times, I can contest that the film is very rewatchable and has good longevity.

One Reply to “The Social Network”