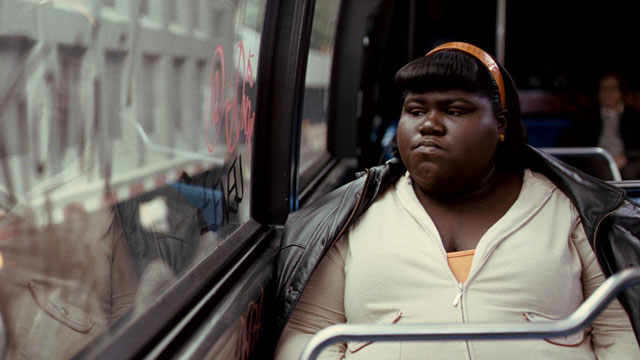 This is  easily one of the most depressing films of the year. Precious: Based On The Novel Push By Sapphire is set in 1987 and focuses on the troubled life of a young African American girl, Claireece Precious Jones, played by Gabourey Sidibe. Precious has many problems and issues in her life. I rather not spoil the problems because they are the basis for the entire film. Also, there are too many to even list, as more issues arrive and they build on top of each other through out the film.

One of the most prominent problems is Precious’ abusive mother, played by Mo’Nique. Her mother is one of the most evil characters in cinema history. The scariest part of her character is that, unlike many other cinema villains, there are people like her in the real world. The majority of the film is hard to watch, but all scenes featuring Mo’Nique are truly stomach turning. She was supposed to be a hated character so of course I was impressed by her acting. Along with the acting skills by the rest of the cast. Especially how they were all able to make themselves look so ugly and almost unrecognizable.

During emotionally scarring moments in Precious’ life, she day dreams. In these dream sequences Precious always places herself in a different better life. I felt that they were completely disconnected from the rest of the film. I understand that she used the day dreams as an escape from something completely horrible but what was shown was a completely different tone from the rest of the film and I did not enjoy them and felt they were unnecessary.

The film is, once again, unrelatable to me. I had troubles connecting with a young African American girl with so many problems. I did feel sorry for Precious. Very sorry for her and for anyone who would have to experience only a single one of her issues in an entire life time. This is what makes the film so difficult to watch. Not only do you have visually watch a character in a film experience so many problems, but you are also forced to realize that there are many people in the real world with the same issues.

I am becoming depressed by just writing the review and thinking back on the film. Since the film was unrelatable to me and I had a hard time watching it, I have to put this film as my least favorite film out of the 10 Best Picture Nominees. If you did not already know, Precious: Based On The Novel Push By Sapphire is in fact actually based on the novel Push by Sapphire.

2 Replies to “Precious: Based On The Novel Push By Sapphire”