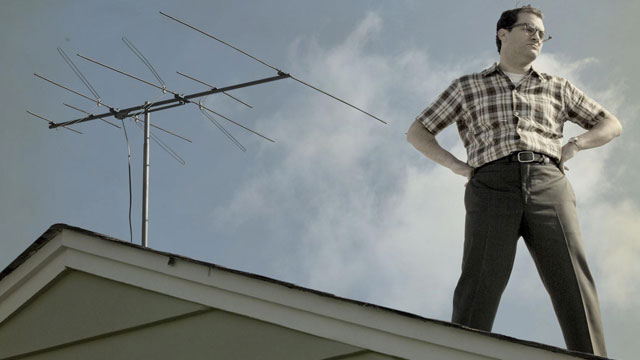 A Serious Man is about a Jewish American man in the 1960s as every aspect of his life falls apart. From the extremely large spoiler heavy things, to the completely minor things, like the TV going out, there is nothing in his life that is untouched. It even extends to his entire family, with all of them having parts of their own lives falling apart. My review is very spoiler heavy and becomes less of a review and basically becomes an analysis of the film because so many people did not understand it. Read on if you have already watched the film or do not mind spoilers.

The opening scene of A Serious Man features a seaming unrelated story on the surface to the main film, but it has a deeper purpose. It features an older Jewish family in the early 20th century in Europe. They never explicitly states that the main character in the film is related to them, but by the rules of Chekhov’s gun, not only are they related to the main character, but their own miss actions are the cause of the main characters misfortune. The opening scene could have three other major points; the idea of telling far fetch family stories, the old idea of curses, or just to show a traditional European Jewish family in the early 20th century. So maybe in the end, it was actually needed.

Spoiler Alert, here is where I get spoiler heavy with the plot and ending. The entire film loops around back to the exact spot where it started. Ignoring the opening scene, the very first scene we see, is the main character’s son trying to pay off the another kid at school. He loses the money and though out the entire film he cant pay the kid back. One of the son’s few problems he has to deal with. The son finally gets the money back and in the very last scene we see is him, in the exact same manor as that the very beginning of the film, the son gets ready to hand over to money to the other kid before the film cuts to the credits. The second scene we see is the main character at the doctors office. The second to last scene the doctor calls the main character to come into his office for bad news. So the film ends on the same note as in began.

A lot of peoples problems with the A Serious Man is that there is no resolution to anything but instead the film cuts to credits even before the final climax. At first I was shocked when I saw the credits rolling but then seconds later I realized everything and actually thought it was funny what the Coen Brothers did. Through out the entire film they blatantly stated multiple times the idea of no resolution to a story.

The opening scene had no resolution, unless the entire main part of the film is the actual resolution to the minor story.

The main character has multiple dreams but wakes up during the climax, so there is no resolution to any of them.

The main character is a professor of physic and explains two different ideas about quantum mechanics. Lucky for me, I have already read up on the basic ideas of quantum mechanics to under stand it when it comes up in media, such as this film. So I already knew both quantum mechanics ideas that were explained before viewing this film. The first, he explaining Schrödinger’s cat. A very deep and complex idea but to put it simply; It is a thought experiment of the idea of putting a cat in a box with acid and closing the box. Then you do not know if the cat is alive or dead, thus no resolution. The second theory he talks about was the Uncertainty Principle. The name alone tells you that you can not know everything because some things will be left uncertain.

All these things add up and everyone should have not been surprised when the film had no resolution. First off the films resolutions could only go in two direction. Second it would actually be boring an unnecessary to see it. Either the doctor tells the main character he is fine, or there is seriously something wrong. The doctor called the main character over the phone, but forced him to come in, which means only one thing, there is something seriously wrong. As for the main character’s son, either him and everyone else dies from the tornado, or they survives it. Both parts we do not need to see. This is my third favorite film out of the 10 best nominated for best picture. I think very highly of this film and it is in third place only because I like the other two just slightly more.

2 Replies to “A Serious Man”