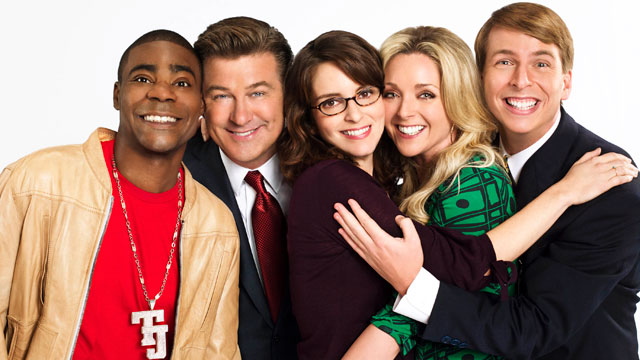 30 Rock went live tonight on the set of Saturday Night Live. Now in its 5th season, NBC appears to have started having some faith in a show that just makes fun of the network. The sexy librarian Tina Fey, the crazy in real life Tracy Morgan, the oldest of the Baldwin brothers, and many others are use to doing live performances on SNL. So a live 30 Rock is a walk in the park for most of them.

The show opens with Liz Lemon (Tina Fey) and Jack Donaghy (Alec Baldwin) making fun of the visual look of the current show since its broadcast live instead of being filmed. Even though the show is live, they did not cut any corners. The show did not lose any of its surreal and random humor, including quick cut always to past events, which featured Liz Lemon played by Julia Louis-Dreyfus due to “Seinfeld Money”. They take advantage of it being live by making fun of current events, like the Chilean Miners, and Brett Favre.

SNL alum and 30 Rock alum from season one, Rachel Dratch returns along with Chris Parnell as Dr. Leo Spaceman (pronounced /spəˈtʃɛmɨn/). Also making a guest appearance was Liz Lemon’s former boyfriend, played by the mantastic Jon Hamm from Mad Men. And the only possible couple that looks more perfectly beautiful than Tina Fay and Jon Hamm, Matt Damon appears as Liz’s current boyfriend. But Bill Hader of SNL had to confess his love for Matt Damon.

If there was anything wrong with there show, there was not enough Judah Friedlander and Jack McBrayer. But all the guest stars made up for that. The cast will do the show twice, once for the east coast and once west coast. Both will be up online at NBC.com and everywhere else on the internet within hours. They do have two and a half hours to reset and get ready between the two broadcasts.

Rating: 5 out of 5 stars. Its live and they are doing it twice.