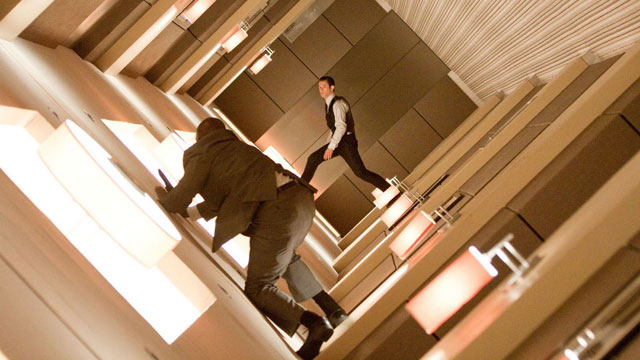 Let’s make Inception simple. It is a mind bending, city folding, car chasing, hotel floating, gun welding, mind altering, dream within a dream, action packed movie. Along with that, the all star cast features the broken hearted Leonardo DiCaprio, the exit wounded Ken Watanabe, the zero gravity Joseph Gordon-Levitt, the psychotic Marion Cotillard, the hot Ellen Page, the hilarious Tom Hardy, the manipulated Cillian Murphy, that same guy from Avatar last year Dileep Rao, that one old guy Tom Berenger, and the very British Michael Caine. On top of all of that , the film was written and directed by Christopher Nolan, the writer and director of Batman Begins and The Dark Knight. You mind has just been Incepted.

The film is nominated for eight Academy Awards. Including Best Picture, Best Original Screenplay, Best Original Score, Best Sound Editing, Best Sound Mixing, Best Art Direction, Best Cinematography, and Best Visual Effects. It will easily win Best Visual Effects because of the amazing scenes like when Ellen Page made the city fold on itself or the awesome scene where Joseph Gordon-Levitt was fighting that agent in the spinning hallway.

The film has so many cool scenes and positive things about it, that is impossible to list them all and much easier to just say what I did not like about Inception. Sadly, this amazing film is not perfect. You might think that it is perfect because the films score and music was so epic. The problem with the film was Leonardo DiCaprio’s character’s relationships. He lost his wife and wanted to be reunited with his children. I did think that a strong part of his character was the longing for his character. The problem was more with his wife because I thought the relationship was a little weak. I was not turned off by her character herself, even though she was just a cold psychotic shell of her former self. It was more the relationship between her and Leo, especially for how critical it was towards Leo’s character and the entire concept of the film.

There might be a few problems with how the dream rules actually work, but I can easily overlook that. Also, that snow fortress scene was not as fun as the rest of the dreams, but Tom Hardy was hilarious through out the film and made up for it. Of course all the great things about Inception overshadows the minor flaws, turning it into one of the most memorable films ever.

Inception is easily one of my top favorite films of the year. Is it because now every time I enter an elevator, I pretend I am in zero gravity? Yes.

One Reply to “Inception”